(P) to 18″.  A tough Heron’s Bill from the Pyrenees.  We were delighted that our Erodium has proven hardy at the Systematic Order Beds.  From bright green, pinnate, hairy basal leaves arise leafless, slender stems terminating in umbels of five-petalled, magenta-hued flowers which last from June through September.  The flower centres are touched with white and have intricate deep maroon markings.  The fruit, a prominent schizocarp is composed of five closely united, one-seeded carpels with persistent, elongated styles, appearing beak-like.   Upon drying, the carpels separate and disperse over a foot away from the parent plant.  Self-burial then takes place.  This is accomplished by hygroscopic awns, helical bristles of water-retentive tissue, attached to the carpels.  They spiral in response to changes in humidity and twist in a corkscrew-like fashion, driving the carpel into the ground.  Truly a unique seed dispersal and self-burial mechanism.  Sun and well-drained average garden soil.  3 & T1 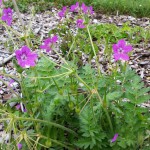 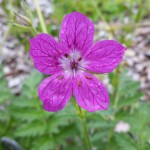