You are here: Home / Archives for Plants

Tender bulb to 2′.  Society Garlic.  Southern Africa. The genus was named for Ryk Tulbagh (1699-1771), one time governor of The Cape of Good Hope.  Clump-forming, narrow, strap-shaped, gray-green leaves to 12 inches tall have a strong garlic smell when bruised. In early summer, flowering scapes rise bearing terminal umbels of sweetly fragrant, lilac-pink flowers. Each flower is comprised of six narrow tepals, tubular at the base that open to a star shape. A characteristic of Tulbaghia is the modified “corona” in the centre of the flower.  This is a raised crown-like structure, but not “entire” like the trumpet of a Daffodil, this corona has only three raised fleshy protuberances on three of the tepals in the centre of the flower.  Flowers and leaves are edible and may be used in soups and salads.  Long lived in a pot.  Sun.  3 & T2

Tender bulb to 1″.  Eastern Europe to Central Asia.  Dainty, six-petalled flowers of pale pink to rosy lilac appear in early spring from stout, horizontal, underground stolons.  The linear, grey-green leaves appear after flowering and die back during summer dormancy.  Best grown in a pot to view at eye level .  Sun.  3 & T3, then may need 40º for 2-3 months. 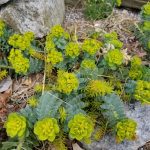 (P) to 3′.  Dancing Crane Cobra Lily.  China, Japan.  This late emerging Jack-in-the-Pulpit, when established, can reach up to five feet and become quite the show-stopper.  From a thick leaf stalk emerges a solitary, horseshoe-shaped leaf boasting over a dozen leaflets…very interesting.  The inflorescence is held above the foliage; the spathe is matte-green and curves over to resemble a cobra’s head, hence the common name.  From within the spathe comes a 12-inch long, greenish yellow spadix that curves out from under the hood of the spathe and stands erect.  Does best in well-drained, humus-rich soil in partial shade.  3 & T1