You are here: Home / Archives for Wildflowers

(P) to 4′.  Virginia Bunchflower.  Eastern North America.  This garden-worthy native forms dense clumps of narrow, yellowish green, grass-like leaves up to 20 inches in length. Many panicles of creamy white flowers are comprised of six spreading tepals, six stamens with white filaments, three white styles and a light greenish yellow ovary.  At the base of each tepal are two conspicuous glands that are yellowish green and secrete nectar.  As the flowers age they change in colour from creamy white, through greenish to yellow. Flowers are replaced by ovoid-lanceolate seed capsules that are the most decorative in the genus.  This plant was a star performer on our Order Beds this year.  Happiest in moist, fertile soil.  Full to partial sun.  3 & T1 & Δ

(P) to 2′.  Hairy Beard-Tongue.  A very hardy Penstemon that is native to eastern North America.  Lovely, dusky, pale purple flowers with white lobes add a subtle presence to the spring garden.  Leaves are lanceolate and acute.  Both leaves and stems are covered by very fine hairs.  Sun/partial shade. 3 & 6 & T1

Native Annual to 18″.  Venus’ Looking Glass.  A charming wildflower that appears in waste places, disturbed sites, pastures, prairies, roadsides and railroads across a broad native range spanning from Canada to Central America.  Purple, five petalled, open bell-shaped blooms are ½-inch wide and arise stalkless from the leaf axils along the flowering spike.  Throats of the flowers are whitish and reveal a prominent white pistil.  The lower flowers never open and are cleistogamous, with self-pollination occurring in the closed flower.  Small, ¾-inch long leaves clasp and surround the heavily grooved stem (perfoliate), are broadly ovate, shiny green and alternately arranged.  Leaf margins are coarsely serrate to crenate.  Perfect for an open meadow with well-draining soil.  Sun.  4 & T2

P to 2.5′.  White Avens.  North American native.  Basal rosettes are comprised of light green, compound leaves that are divided into 5 to 7 leaflets.  As the leaves ascend the stem, they become trifoliate and then simple towards the top.   They are coarse in texture, deeply lobed and serrated.  The ½-inch flowers have five bright white petals which alternate with five triangular, green sepals.  A central cluster of green carpels with elongated styles is surrounded by numerous creamy stamens.  After flowering the fruits form which are initially green, but eventually turn brown. These fruits are ¾-inch spherical clusters of achenes with persistent styles that are hooked at their tips, aiding dispersal. Geum is tolerant of juglone, the plant-produced chemical secreted from Black Walnut (Juglans nigra) and can grow happily beneath its canopy.  Another plus…due to their natural sweetness, the root of White Avens can be used to brew a cocoa-like beverage referred to as “Indian Chocolate”.  Summer blooming at woodland edge. 3 &T2

(P) to 3′. Elephant’s Foot.  US, West Indies.  Valued for its late summer to fall bloom and large, attractive lower leaves, which inspire the common name.  Bloom consists of many small, tubular, pale lavender disc florets which are arranged in compound inflorescences.  Although a member of the composite family, the flowers of Elephant’s Foot are not daisy-like in appearance because each flower head contains only disc flowers.  Similar in appearance and closely related to the ironweeds (Vernonia).  Forms a nice groundcover in dry to medium moisture soils.  Sun/partial shade.  3 & T1

(A) to 3′.  Indian Tobacco.  Another great native North American plant for the flower border!  Spikes of small fan-shaped light blue flowers with a bearded lower lip are followed by fat balloons filled with seeds.  Long blooming from summer to frost.  The alkaloid Lobeline, was used until recently to appease nicotine cravings.  Sun.  3 & 6A 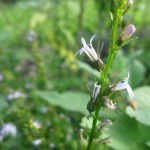 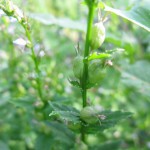 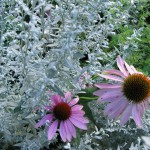 (P) to 2′.  Ragged Robin.  Europe.  Erect, branching stems hold a long succession of shaggy, soft lavender-pink blooms.  The flowers have five narrow petals; each deeply divided into four lobes giving the flower an untidy, ragged appearance, hence its common name.  The leaves are paired, with the lower leaves spoon-shaped, stalked and forming a basal rosette.  The middle and upper leaves are linear-lanceolate with pointed apexes and entire margins.  The stems have barbed hairs pointing downward and these hairs make the plant rough to the touch.  Blooms from May through August.  A sight to behold en masse.  Full sun with moist, but well-drained soil.  4 & T2